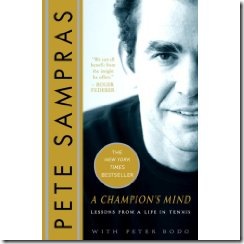 I thought I'd switch gears and read something fun for the summer. I picked up Sampras book A champion's Mind. Now that his 14 Grand Slam record is broken I was curious to get a glimpse of his life and to learn about the tennis  tour.

I was never a fan of Sampras. Despite being an avid tennis follower, Sampras went under the radar for me. Despite his achievements he lacked the charisma and thrill  (Not to mention being rude to his fans off court).

Reading the book did not change my view of Sampras. But it gave me some appreciation of the tough conditions of being on the tennis tour. There was a lot of insight of his rivalry with Andre Agassi. He talks about his struggles with a mentor, coaches, the media and his health. He shows a lot of respect and admiration to the person who eclipsed his record, Roger Federer. If you are a tennis fan the books makes an interesting read.