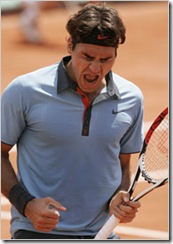 It was the winner as it turned out. “Honestly, I made it and said voila,” Federer said.

French Open - At the French, the Elephant has left the Room - NYTimes.com

For tennis fans, this year's French  Open is full of surprises. The biggest is the exit of 4 times champion and number 1 ranked Rafael Nadal.  So you would think this would clear the way for the number 2 ranked Roger Federer to capture the one title he is missing. It is not that easy.

When Federer faced Tommy Haas in their fourth round match things didn't exactly go according to plan. Roger lost the first two sets and was facing a break point in the third. And then:

The second-seeded Federer would win, conquering his own evident nerves and Haas’s still-evident talent. But it would require a stirring comeback that began with a bold forehand winner on that break point at 3-4, 30-40 in the third set before the Swiss could close Haas out: 6-7 (4-7), 5-7, 6-4, 6-0, 6-2.

It's a good life lesson when things don't go as you like. You pull yourself together and you make it and voila! Good luck Roger you can make this happen.