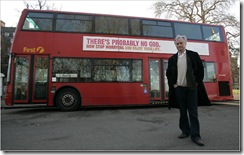 Supported by the scientist and author Richard Dawkins, the philosopher A. C. Grayling and the British Humanist Association, among others, the campaign raised nearly $150,000 in four days. Now it has more than $200,000, and on Tuesday it unveiled its advertisements on 800 buses across Britain.

Interesting way to counter the religious campaigns, which we are seeing more and more of in Kuwait. I don't know why so many people are concerned with what people believe or not believe in?! Live and let live. Keep your preaching one way or another out of our sights!

It would be nice to test our religious "freedoms" in kuwait by doing something similar to this.
i am a kuwaiti, and a huge fan of prof. richard dawkins.

I think it's a little too early for this in Kuwait..