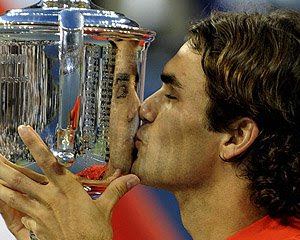 What a way to end the season! Roger Federer wins the 5th consecutive US Open title in Flushing Meadows, Queens NY after a tough year, at least by his own standards. This is the first major title for Roger this year compared to three major titles last year (13 overall).

Earlier he lost the long held number 1 ranking. Many started counting him out. He proved them otherwise. Still the best!
Posted by Bu Ziyad at 10:00 PM